Find with Euminia reliable charter companies and top charter yachts
Euminia provides transparent reviews by real customers. Benefit from the experience of other yacht charter customers and start relaxed in the most beautiful time of the year your yacht vacation!
Euminia > Greece

Greece, located in the eastern Mediterranean, has an impressive archipelago. There are more than 3,000 islands to discover, of which only just under 90 are inhabited. Greece is influenced by especially two factors: the sea and the mountains. Therefore, the  Greek islands and peninsulas are only the peaks of seamounts, as can be seen clearly from the air.
Not only are there romantic fishing villages and popular tourist destinations, evidence of Greek's rich culture and versatile culinary delicacies can be found everywhere. Greece is divided into five sailing areas, all of which have something to offer all yacht charter clients:
• Cyclades
• Saronic Gulf
• Dodecanese
• Ionian Islands
• Sporades
Greece has been one of the most popular sailing areas in the Mediterranean for years. Each sailing area has a different characteristic, just as each visitor is different. The Ionian Islands in the NW of the country stand out because of the moderate winds, a pleasant climate, abundant vegetation, lots of bays, sandy beaches and anchorages. It can get quite full in high season as the sailing conditions here are perfect for families and beginners. However, experienced sailors will also be able to get enthusiastic about the many small gorgeous bays with crystal clear water.
The Aegean Sea is a challenge as well as a passion for boaters. The Cyclades in particular portray the classic image of Greece with white houses with blue domed roofs, nestled in the rocks under the blazing sun. Many taverns with a quaint appearance seem to appeal to water sports enthusiasts and locals alike. Guests sit on the terraces overgrown with grapevines, listening to the syrtaki music while enjoying some wine, bread and various delicacies. Expect a strong wind from the NW, the Meltemi, especially in summer. When the Meltemi blows, waves sometimes tower up metres high and the sea spray makes breathing difficult. Care needs to be taken especially when there is a cape and jet effect. Even experienced yacht charter clients will have to plan on spending a few involuntary days at the harbour.
The Sporades are located in the north-west Aegean Sea. These islands have fewer tourists than the Cyclades. Skiathos, the main island of the Sporades, is a very popular starting point and destination. Every island can be reached at a blow and visitors will still have time to enjoy the cultural and scenic attractions. The Meltemi blows across the Sprorades in summer without hindrance, therefore extreme caution needs to be taken.
The Dodecanese, directly off the Turkish coast, are also worth visiting. It takes a good two weeks to sail the twelve large and twice as many small islands. If taking a side-trip to the Turkish coast, expect the administrative procedure to take a long time. Many boaters are also deterred by the high clearance costs. But the many remnants of a past steeped in history make up for it greatly.
Climate
The climate in Greece is predominantly Mediterranean. Mild wet winters alternate with hot, dry summers. In the Ionian Sea, quite consistent winds from the NW prevail during the day. At night, they calm down noticeably. However, expect the Meltemi in the Agean Sea. 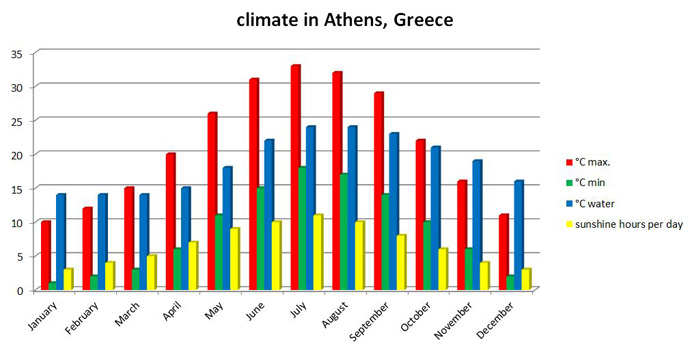 You will find many interesting places worth visiting on mySea.